Not much is known about the Protagonist's appearance, but it is assumed they are a child no older than around ten. They are deceased after their encounter with Mama Tattletail in the regular campaign's normal ending, though this is not considered the true ending. However, if the player unlocks the secret ending, they survive. They also survive both of the Kaleidoscope endings. However, If you look in a reflection item. You will see The Protagonist as a purple circle particle. 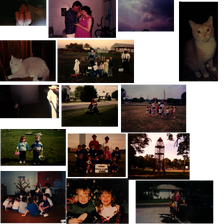 Various other family photos, some featuring the Protagonist and their sibling.
Community content is available under CC-BY-SA unless otherwise noted.
Advertisement