Very little is known about the Kaleidoscope, besides it being a dangerous place where all of people's memories are stored. It takes on the appearance of a visitor's most remembered location, with the exception of having surreal geometry that defies the laws of physics. The note writer mentions in their notes to the Protagonist that the longer a person stays in the Kaleidoscope, the more their memories can change forever.

During the Protagonist's visit, the Kaleidoscope takes on the appearance of their house, except there are three floors, with the first two floors both depicting the kitchen, their bedroom and the sitting room. The air is also misty, with there being cracks in the air, and visibility is low, requiring the player to use the flashlight to be able to navigate. There are also a lot of refrigerators, charging stands and brushes for the player to satisfy their Tattletail's needs. Various furniture is scattered throughout the rooms, with most of it being crumpled up, floating in the air or attached to the walls.

The gardens are not depicted in the Kaleidoscope, and are thus inaccessible, and a brick wall is seen behind the back door. Mama Tattletail, Night-Night and Snowglobe can be found on the first floor, and a red casette tape can be found on the second floor in that floor's copy of the Protagonist's bedroom. Mama Tattletail is in a powered-off state, though the player can find the red casette tape and insert it into her. It is revealed to be an explanation of the Waydrive, a device that makes each Tattletail life-like. 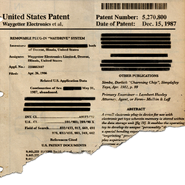 The old note.
Add a photo to this gallery
Retrieved from "https://tattletail.fandom.com/wiki/The_Kaleidoscope?oldid=6404"
Community content is available under CC-BY-SA unless otherwise noted.