The house is where the majority of Tattletail takes place. It is also where the Protagonist lives with their mother.

There are two gardens in Tattletail; one at the front of the house, and one at the back. The front garden looks like a typical garden , with a path to the door, a lawn and everything a typical yard has. It has a dog house to the left of the door (though not as of the Kaleidoscope update). There is also a set of exterior doors leading to the basement, which can be opened at any time. The back garden contains very little, apart from some bushes and a garage.

The whole house is surrounded by a wire fence, preventing the protagonist from leaving.

The hallway is an area at the front of the house, and contains the front door. It also allows access to the sitting room, dining room, kitchen, the Protagonist's bedroom and Mom's room via doors. It contains very few other notable features, these being a bookcase, two windows and a small table with a potted plant.

The sitting room is where the hairbrush can be found. It is also where the player opens their Christmas present on Christmas Day.

The sitting room houses a few windows, and furniture one would expect a sitting room to have, these being an armchair, sofa (which has the hairbrush lying on it), a fireplace, a couple of cabinets and a bunch of framed photos. There are also posters on the walls, an air-conditioning unit and a music player, coupled with a speaker. Additionally, a Christmas tree sits in the corner of the room. It is decorated with lights, which the player takes during Christmas Eve as part of the ritual. For some reason, a music box can be heard from behind the tree.

The kitchen has the features of a typical kitchen. There are various shelves and cabinets, a microwave, an oven with a stove, a sink, kitchen utensils and a refrigerator. There is also a phone and another air-conditioning unit, as well as several paintings adorning the walls. On one of the counters are some red candles, which are used during the ritual on Christmas Eve. The back doors can be also be found here, as well as a door leading down to the basement. Neither door is open on Christmas Day, and although the door in the front garden can be used to access the basement, there is no way to access the back garden.

The dining room is located between the kitchen and sitting room. It contains a table and chairs, two potted plants, a cabinet with a photograph and a lamp, and an air-conditioning unit. There is also a set of shelves with another photograph, another potted plant and a pile of plates. Additionally, a paper plate with some pink frosted cupcakes can be found on the table on Christmas Eve, and are used during the ritual.

The basement is where the player can find their Baby Talking Tattletail, and where Mama Tattletail can be first encountered.

The basement is a large, nondescript set of rooms, located below the ground floor. Various furniture is scattered throughout the rooms. The main room is notable for containing the charging stand and a washing machine. The player is led to a side room during gameplay, where Mama Tattletail can be found. There is also another side room where the player breaks a vase and obtains the flashlight. The set of doors to the front garden can be found here, although they cannot be opened from inside the basement.

A view of the sitting room.

Ditto, from another angle.

The music player on a cabinet.
Add a photo to this gallery

A view of the kitchen. 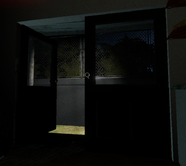 A view of the table side of the dining room.

A view of the opposite side.

The phone on the kitchen wall.
Add a photo to this gallery

The area outside the protagonist's bedroom

The area outside the living room. 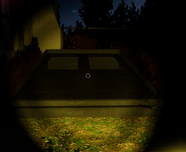 The door leading into the basement.

The area near the back door.

The area leading up to the garage.

The area outside of the garage.

A view inside the garage.

The front garden on Christmas Day.
Add a photo to this gallery

A view of the hallway. 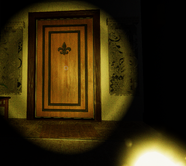 The front door with boxes seen on the outside.
Add a photo to this gallery

A map of the basement.

The stairs leading down to the basement.

The area at the bottom of the stairs.

The area leading up to the main room.

A view of the main room.

The side-room where Tattletail is first unwrapped.

The area between Mama Tattletail's room and the front garden basement door.

The room containing the washing machine.

Ditto, during the Kaleidoscope campaign.

A view of the room where the flashlight is obtained.

The shelf containing the flashlight.

The room where Mama Tattletail is encountered. 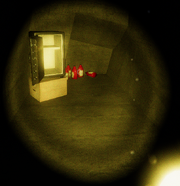 The mini-fridge near where Mama Tattletail first sits. 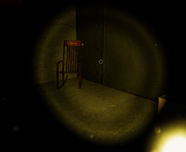 The rocking chair in the corner. 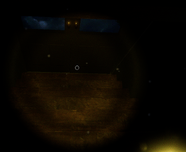 The door leading out the basement to the front garden.

A purple, yellow and blue Tattletail gathered for the ritual.

All 5 Tattletails in the basement.

The basement tea party.
Add a photo to this gallery
Retrieved from "https://tattletail.fandom.com/wiki/The_House?oldid=8820"
Community content is available under CC-BY-SA unless otherwise noted.