Boring Tattletail (unofficial name) is a purple-coloured Tattletail introduced in the Kaleidoscope update. He speaks in a robotic monotone.

The Boring Tattletail shares the features of the regular Tattletail. However, he has green eyes, gray eyelids, a white edge around his nose and a dull grayish purple coloring to his fur. He also has purple spots in his fur. Additionally, the highlights in his eyes more closely resemble those of the Waygetter Electronics logo.

Besides his robotic voice, the Boring Tattletail seems smarter than the normal Tattletail, because he always utters random facts throughout gameplay. For example, "Chickens lay eggs, almost everyday." However, most of his facts are obvious statements, such as there being a lot of numbers, and Neptune being a planet in the Solar System. 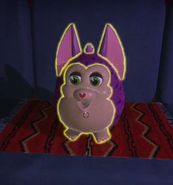 Boring Tattletail on the sofa. 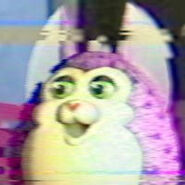 Boring Tattletail as he appears in the commercial.
Add a photo to this gallery
Retrieved from "https://tattletail.fandom.com/wiki/Educational_Baby_Talking_Tattletail?oldid=4444"
Community content is available under CC-BY-SA unless otherwise noted.