The aforementioned features that Tattletail possesses must be frequently monitored and attended to by the player. While he is equipped, three bars in the top left-hand corner of the screen display his needs, allowing the player to distinguish which needs must be paid attention to first. Tattletail is also responsible for emitting a plethora of noises that can alert Mama Tattletail to the player's location. When all three meters drop to zero, you are guaranteed a Jumpscare and Instant-Death, so when cheating by staying on the stairs (the player is immune against noise and Mama here, since Mama has fixed movement nodes and a Max Sound Range), don't forget to check the bars. His in-game appearances are as follows: 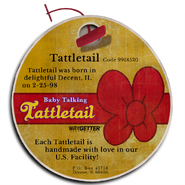 Tattletail's tag given during the Gift Ending. 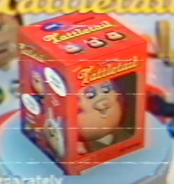 The Tattletail box again. Note the black variants on the top of the box.

Tattletail as he appears inside the box in-game.

Tattletail as he appeared out of the box in-game before the Gift update. Note the white lines around his nose.

Tattletail as he appears out of the box in-game.

Tattletail's package open with Tattletail inside.

Tattletail as he appears in the commercial. 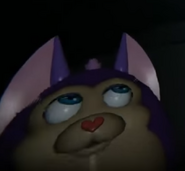 Tattletail when afraid of the darkness.

Tattletail with the player heading out of their bedroom.

Tattletail with The Player heading out of the basement.

Tattletail and the Player outside. 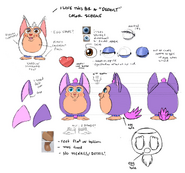 Tattletail as he appears in the official "Happy Birthday" image. 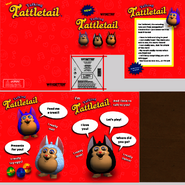 The texture used for the Tattletail boxes.

Tattletail as he appears on the Waygetter Electronics website. 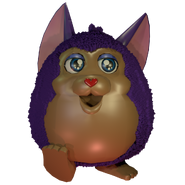 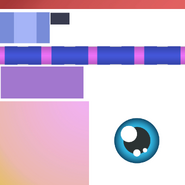 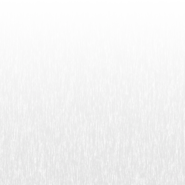